I went to an Art Talk at the Institute of Contemporary Art, Los Angeles. It was my first visit to their space on the East side of Downtown Los Angeles. It is in a warehouse loft space and rather modern and urban. The space is large enough that they had three different artists sharing their work, and a gift shop. To my amusement in the gift shop was also a ping pong table and people were partaking of the activity. It not usual to see an art gallery hosting ping pong games.

I unfortunately came late to the talk. It was my first time there and I am bound by public transportation. The talk was with Patty Chang whose exhibit is called “The Wandering Lake 2009 – 2017.” Chang is an American artist whose work had primarily been in video and photography. This exhibit is a combination of photography, video, and travel souvenirs around water. It is an artistic exploration of the geopolitics of water This exhibit is inspired by a book by colonial explorer Sven Hedin written in 1938 called “The Wandering Lake, Into the Heart of Asia.” The book is about a mysterious lake in constant flux called “Lop Nur.” The exhibit is basically the different lakes that Chang has visited in her quest to in effect find “Lop Nur.”

One of those journeys in 2015 took her to New Newfoundland Canada where she shot footage of herself washing a beach whale. This act of cleaning the whale symbolizes getting rid of the harmful touch of humanity on nature.

I want to add at this point that the exhibit is not for children.  There is nudity and the act of peeing.  Yes I am saying the artist pees on tape.  This reminded me of the work of the notorious Robert Mapplethorpe.  I wrote a paper on his work in Graduate school, or the legal case on his work.  In 1990 for the first time in the history of the United States a museum curator in Cincinnati Ohio was arrested for obscenity.  The curator eventually won the case.  In the Mapplethorpe incident there were only seven photos that were questionable and they were put in a separate room with  a warning.  Just to give it historic significance, the web did not have photographs at all in 1990.  If you want to know about the case, follow this link for a good article on it.  I asked the artist about the meaning of the peeing.  She did not have a definitive answer.  To me it kind of represented that life is part of us and we need it but do not respect it as much as we should.  I think I caught the artist in a moment of exhaustion because according to the exhibit explanation the urination represents the periodie flooding of the Yellow River in China.  However we do waste water just as are body uses it to get rid of waste. 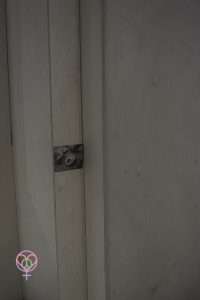 There were a few videos including what seemed to be a home movie with family and several photos mounted on large wooden standing platforms like the one in this picture.

Chang traveled both to the source of the original Lake in Xianjiang Uyghur  China in 2009 and Uzbekistan Aral Sea, both regions largely  impacted and depleted by human activity.  Photographs and images from these trips can be found in the exhibit and again demonstrate how much man’s touch is effecting the one resource all life depends on.

There is now also an Art Book called “The Wandering Lake” with images from the exhibit and stories and commentary by Chang.  Many of the descriptions in the exhibit actually include quotes from this book.

The final video in the exhibit is at the Aral Sea and shows the artist washing a deserted fishing boat, again the concept of trying to remove human impact.  I did not take any images of that part of the exhibit.  I believe my camera battery died.  Chang’s work will be on display until July 21, 2019.

In addition to Chang, their are two other artists on display.  The very first artist is Maryam Jafri is a Copenhagen New York based artist and this is her first United States solo museum presentation.  I love the title of her exhibit,  “I Drank the Kool-Aide, but I Didn’t Inhale.”  It is a series of products in glass display classes with written histories of each product.  This is a re staging of a prior work called “Product Recall: An Index of Innovation.”  The exhibit demonstrates a disturbing pattern of market manipulation and bad faith.  Several of the products are familiar.   Some show how short sited manufacturers can be in meeting consumer demands.  This exhibit shows how the history of consumer research reflects a desire for profit gains and social power rather than good will efforts to improve quality of life. 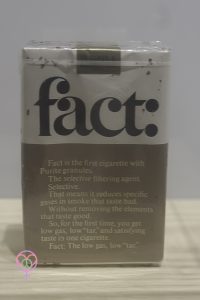 For example the “Fact” cigarette and the “Fact” Magazine. I think I will pass on the first one. And so did many people.  The second was sued by Senator Barry Goldwater in 1967 and lost.

PLUSmeat a meat alternative derived from Soy, along with this example of the product there is a history which includes the fact that in 2012 a child sex offender in prison sued Illinois Department of Correction over the amount of soy in his diet.  He loses with the courts deciding that the state is required to feed him, but they are not required to feed him meat.  There is more to the history and I would try to go see it for yourself.  This is also just a sample of the products on display.

I found it curious that Jello made the exhibit, since one can still find Jello for sale.  Instead of a history too, there are irregular recipe ideas for how to serve it.  Perhaps this is a statement that not all consumer products are evil.  Though the stories of some kinds of candy laced with ingredients that would be illegal to use today are rather shocking.

Finally I love basketball so I could not pass up sharing this one of Spalding Basketball. Spalding Basketballs are still around.  The questionable product you can not see inthis image is called the “Spalding Sports Refresher.”  It was the first athletic drink targeted to African Americans.  It had 30% more sugar than Gatorade.  The company decided that the drink was negatively impacting their good name as a basketball supplier and withdrew the product. I think that was a wise choice.

This exhibit is a fun trip into the past of consumer America but also a scary one. It makes you realize how greed can make us incredible short sited and wasteful. Jafri’s work will be on display until June 30, 2019.

The final artist Brooklyn based photographer, Lucas Blalock, is also a first solo exhibition.    Blalock is known for re imagining historic tropes like portraiture.  Much if his work is inspired by the German play write  Bertolt Brecht.  The title of the exhibit “An Enormous Oar” is from a 1977 novel called “Modern Love” by Constance DeJong.  His work combines studio photography with digital manipulation. 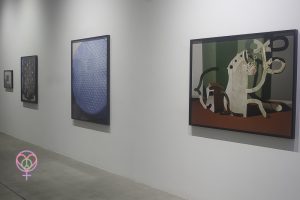 Flexible.  Be reasonable and rational.

Closed Sunday and Monday, negotiable for film set and acting assignments and writing gigs for Theater

I volunteer and work with horses Sunday and Monday morning.

I have had a license since 2011.  However due to a stalker I have been afraid to display my license. I am a freelance professional, so do not disturb me at my HOME. Email or call.

To the PEOPLE with SAG AFTRA and my Stalker- Because I have this license, I could be legally hired as a professional ACTOR or as a Professional journalist, writer, photographer, digital designer and EDITOR.  I need to have my other license changed to FILM PRODUCER or a category so I could make my own films.

Business License- DO NOT DISTURB ME AT MY HOME

Please send all MAIL to:

There is no guarantee I will get mail if you send it to the address on my license, especially packages. DO NOT DISTURB me at my HOME.  My building is security monitored.